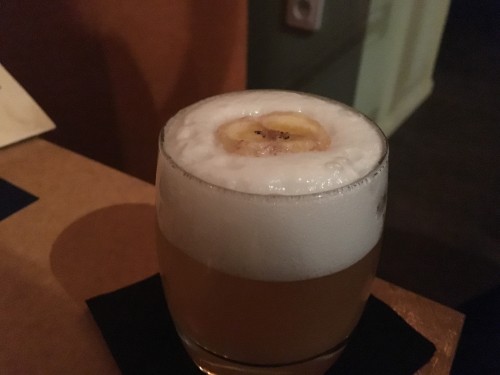 Grilled cheese seems like the epitome of spontaneous late-night eats, yet you’ll want to make a reservation at Mabel if you’d like yours washed down with a cocktail. The small speakeasy-style bar nestled behind a family-friendly grilled cheese sandwich shop requires clients to be seated, which is great for a cozy tête-à-tête and less exciting for those who want to mingle. It also means that, while walk-ins are welcome, they could well be disappointed. If the sandwich alone is your poison, you’re better off visiting the street-facing shop,  where alongside the traditional a handful of other flavors including a classic tuna melt, vegetarian pepperoni, pulled pork, and rum marinated bacon with egg are on offer. They’re authentically greasy enough despite the virtues of seeded bread.

In the bar, a self-proclaimed “cocktail den and rum empire” the rum selection is, indeed, impressive at more than 100 varieties and counting,  but there’s a bevy of other options from Joseph Akhavan using a variety of other spirits, too, and one of the best bitters selections in town. There’s a lot going on in his complex cocktails and it’s a great place to discover a more sophisticated side of the liquor we so commonly associate with Spring Break, but a few of his thoughtful pairings have perhaps a little too much going on, notably a “Tempted to Touch” which featured Stilton infused rum with “banana colada” emulsion.

Travel & Leisure (2015) “At this popular bobo spot, waiters in jeans with suspenders are on hand to serve cleverly named $14 drinks like “Tempted to Touch”—boasting an unusual rum infused with Stilton cheese and a “banana colada emulsion”—many of which come with delicious garnishes, such as a bite of sugary licorice with cardamom.”

Condé Nast Traveler (2015) “Lombardi says part of what draws him back constantly to this serious rum cocktail bar is Joseph Akhavan, owner and expert barman who got his start mixing drinks at Mama Shelter and La Conserverie. ‘Joseph is exacting in everything he does. I love the service and the environment is so calm. It doesn’t feel like Paris when I’m there!’ ”