The Menace of Culinary Displacement in Paris 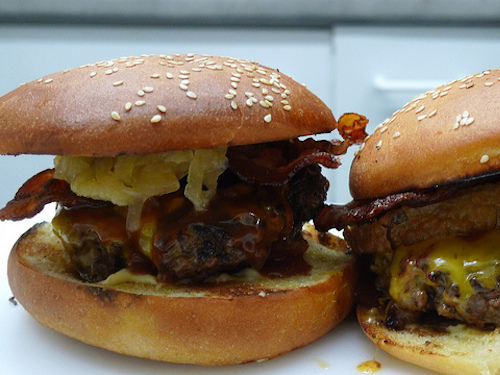 After a recent morning spent playing restaurant ping-pong via email with my friend Dorie, it dawned on me. We were trying to create an eating itinerary of traditional French bistros for a pair of retired chefs visiting from Oklahoma, and it proved to be a daunting task. Why? These men were coming to France to eat epic Gallic grub—you know, blanquette de veau, boeuf bourguignon, and coq au vin—and even with the difficulty of summer opening hours notwithstanding, it startled me to realize there’s just not a lot of that on offer in Paris anymore.

The explanation for this surprising state of affairs is that Paris is in the midst of an accelerating process of culinary displacement that’s sidelining traditional French food. These days, in fact, it’s a lot easier to find an Italian or a Japanese meal in a popular Paris neighborhood like Saint-Germain than it is a traditional French one. There are many reasons why culinary displacement, or the substitution of one cuisine for another, can occur in any large city. Immigration can add a new ethnic kitchen to a gastronomic landscape, food styles change, economic factors favor one cuisine over another, and of course there are food fads and trends. In some circumstances, culinary displacement can be an exciting and rather wonderful thing. For example, I consider the relatively recent availability of good Mexican food in most large American cities to be a good thing because it’s one of the world’s great cuisines and its availability has added rather than subtracted something to available restaurant choices in most American cities. Similarly, the spectacular array of ethnic cuisines on offer in London today has made it one of the world’s great food cities, and they’ve enriched the city’s restaurant offer rather than diminishing it.

What’s happening today in Paris, however, is different. Instead of complementing the existing restaurant offer, many of the new kitchens and restaurant formats are cannibalizing the city’s gastronomic landscape, and something really precious—notably traditional bistro cooking—is being lost. There are lots of reasons for this. Among them, the business-lunch trade that sustained the balance sheets at many traditional bistros has changed in favor of meals that are lighter, shorter and cheaper, while corporate France continues to migrate out of Paris to adjacent suburbs with larger modern office spaces. In addition, the younger “Top Chef” generation of French chefs want to express their culinary creativity rather than cook such rock-of-ages dishes as pot au feu or cassoulet. Restaurant investors prefer cooking formats that are cheap and easily prepared, which explains the dulling incidence of mid-range Paris restaurant menus of tomato-mozzarella salads and salmon tartare—dishes any Senegalese line cook can learn to make in five minutes. That seems to be fine with many affluent calorie-conscious bobos who more interested in stylish places with good atmosphere and décor than they are in good cooking. Younger Parisians, who come from families with busy working parents who did little cooking, either don’t know the cannon of traditional French bistro cooking or find it too ‘heavy.’ The upshot of all this is that the traditional Paris bistro, those cosy places with lace curtains, red-checked tablecloths and the rich soothing smell of long simmered cooking that greets your nostrils when you step in the door, those uber-French tables that are the determined destination of thousands of tourists sitting with their knees pressed up against airplane seat backs as I write these words, has morphed into a rare species which often charges stiff prices for a sincerely sepia experience of traditional French food. Today, rather than being the ballast of the Paris restaurant landscape, ‘real’ bistros are now marketed as nostalgic curiosities where you often pay a steep price for the privilege of eating ‘real’ French food. A dish of cassoulet at Allard

Culinary displacement is occurring at other levels of the Parisian food chain, too, since for every excellent neighborhood eat-in or take-out traiteur like CheZaline that opens in Paris, a dozen more Subways seem to appear every month and the business districts of central Paris have become dominated by sleek soup-sandwich-salad places like Cojean. The latest challenge to traditional Parisian eating habits at the casual-dining end of the spectrum, however, is the sudden and huge popularity of hamburgers.

It’s easy to see their appeal to restaurant investors. Hamburgers are easy to make, popular with both locals and tourists, and are quickly consumed, which means you can flip tables more often. Make them with pedigreed ingredients and you can charge a premium price, too. Burgers from Le Camion Qui Fume, one of the engines behind the current burgermania

So what is burgermania in Paris displacing? It’s probably nibbling into the margins of cafés that do lunch menus based on salades composée and steak frites and also drawing trade away from bakeries and traiteurs which sell such French classics as the baguette jambon beurre (buttered baguette filled with ham), quiche and salads like carottes râpées or céleri rémoulade.

Every time a Parisian choses a burger, he or she is not choosing something indigenous, whether it’s a café salad or a crêpe. A yen for novelty is of course normal, and I love a good burger as much as the next man, but there’s no doubt in my mind now that galloping imitation bred by the success of the first and rather welcome burger places in Paris is putting the city’s casual dining scene in the same threatened category as its traditional bistros. So can or should anything be done about the culinary displacement that’s making Paris less Parisian? While a certain degree of gastronomic evolution is natural, there’s no doubt in my mind that something precious is being lost, and happily others have noticed, too. The whole idea of chef Yannick Alleno’s bistro Terroir Parisien, which uses produce from the Île-de-France to prepare classic Parisian dishes, is to promote the idea that Parisian cuisine really does exist and needs to be promoted and protected. Chef Alain Ducasse has also become something of a white knight by recently adding Allard in Saint-Germain to his cluster of historic Paris restaurants that already includes Benoît and Aux Lyonnais. However, a lot more needs to be done to protect and preserve certain delicious and unique elements of the Parisian gastronomic ecosystem. France desperately needs to overhaul its tax structure for the country’s entire sit-down restaurant industry to make business conditions more favorable, and the city of Paris could create a “Un Vrai Bistro de Paris” label like the one that exists for the ‘real’ bouchons (Lyonnais style bistros) in Lyon. And how’s about an annual Parisian food festival to promote and celebrate the city’s gastronomic heritage? And maybe the major French food magazines will stop offering recipes that involve spooning things into water glasses and return to proposing those that appeal to serious cooks. There’s reason to hope, however. People in other parts of France, like Alsace, for example, still ardently love their regional kitchens and the popularity of sushi in Strasbourg has only served to enrich that city’s food offer without putting any of its rightly famous winstubs out of business. Then, too, Parisians may eventually tire of cheeseburgers and the growing locavore movement in the city could lead to a renewed interest in traditional Parisian bistro cooking. I sure hope so, since I’d love to have more than a dozen answers to the single question I’m most often asked by visitors, which is “Where can we go to get a really good old-fashioned bistro meal?”

19 thoughts on “The Menace of Culinary Displacement in Paris”