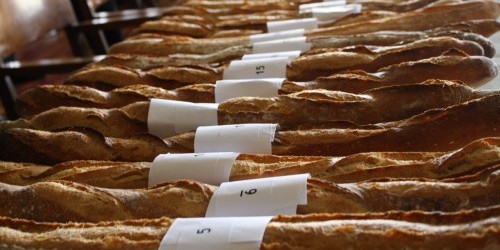 For the second year in a row, the winner of the Best Baguette in Paris competition comes from the 14th arrondissement. Congratulations to Antonio Teixeira from the Délices du Palais for placing first in the annual Grand Prix de la Baguette de Tradition Française de la Ville de Paris!

Teixeira will supply the Elysées Palace for the coming year, and anywhere else that President Holland chooses to wave his baguette. This is actually the second time that Teixeira, who is originally from the city of Fafe in Portugal, has taken the top prize. He also won in 1998 and spent a year supplying baguettes to Jacques Chirac.

2014 marks the second year that a winner has come from down south. Last year’s champion Ridha Khadher also came from the 14th arrondissement after five consecutive years of Montmartre champions.

Thanks to @Paris_by_Elodie and @QueFaireAParis for keeping us posted from the judges’ chambers, and good luck in digesting all that baguette!

Update: we’ve listed and mapped all of Paris’ top ranked baguette bakers for 2014, along with the top winners from the last four years.